Posted at 16:29h in Uncategorized by simon 13 Comments
0 Likes

So, where were we? Let’s review a couple of points:

– The entire body is “mapped” topographically in various areas in the brain. The best known of these areas are the somatosensory cortex and the motor cortex, but there are many others, some of which I’ll be introducing in this post. The “feelings” we have in our bodies correspond to activity in groups of neurons in these parts of the brain: stroke your left foot and neurons in the “left foot” areas will activate, imagine your left foot being stroked and the same neurons will activate, and (importantly) direct stimulation of the “left foot” areas of the somatosensory cortex will feel the same as your left foot being touched (there are different types of sensation which could be stimulated, like heat or pressure or stabbing, but we don’t need to get into that just yet). 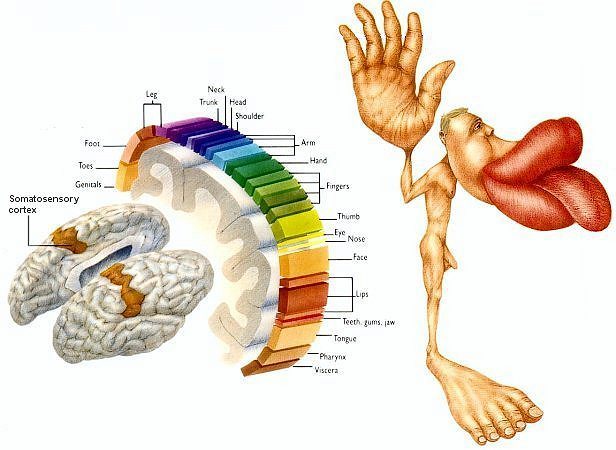 – The take home message is that all sensation happens in the brain: if the foot is touched and sensory neurons in the extremities respond, spinal reflexes and other systems all the way into the brainstem and midbrain can be activated but if the signal does not reach the cortex you won’t feel a thing. Even reaching the cortex doesn’t guarantee that any given sensory signal will be consciously felt, since in any given moment the cortex is receiving a ridiculous number of signals from every sensory modality and only a few of them are strong enough to have a chance of entering our normal awareness.

– All of these “bodymaps” are plastic: they are constantly changing and being updated in response to stimuli. If you spend time carefully stimulating every part of the skin of your right hand and moving all of the fingers, palm and wrist in every possible direction paying close attention to how it all feels, the “maps” in your brain representing your right hand will become more detailed (neurons will become more sensitive to smaller stimuli, they will form more synapses with each other, nerve transmission speed will increase, etc), you will feel more and what you do feel will be more accurate. If you injure your right hand and put all of the fingers and wrist in a cast so that they can’t move for months on end, those same maps will degenerate and you’ll feel much less. Thus, it is possible to feel one’s own body in ever-greater detail through appropriate practice.

– Most of the various Eastern physical-spiritual traditions (and various others, old and new) involve a systematic exploration of all of the positions and movements of the various bones, muscles and joints of the body through “exercise” and of all of the more subtle sensations of the same areas and throughout the entire body through “meditation”. Those same traditions all place particular emphasis on breathing and drawing the attention into (and thus progressively increasing awareness of) the spine and the deep central axis of the body from the perineum at the base of the pelvic floor to the center of the skull. I think that pretty much brings us up to speed, so now we can get into the really interesting stuff: interoception – feeling inside the body.

So what happens when we try to feel inside our bodies? Firstly, it’s often very difficult. Our brains and nervous systems are actually much more inclined to notice what’s going on outside: sounds, visual stimuli, smells, people (“what’s that? is it dangerous? can I eat it? can I have sex with it?“) and so on. We usually don’t notice what’s taking place inside our bodies except for when they are uncomfortable: when we’re hungry, when we’re in pain, we’re hot, tired, or when we’re really exerting ourselves. Of course all of this makes evolutionary sense since most immediate dangers and rewards necessary for survival are outside, and maintenance of physiological processes needs to go on constantly twenty four hours a day and thus it would be far too tiring and complicated for us if we had to consciously monitor and regulate every breath and every heartbeat and every squeeze of partially digested food through our intestines. Nonetheless we do have sensory nerve endings distributed throughout the insides of our bodies that are transmitting information about the various tissues and organs in which they are embedded, all the time – we just don’t usually notice. Just as there are sensory nerves active in the little toe of your left foot right now, transmitting sensory information through your spinal cord to your brain, but you didn’t notice them because your attention was somewhere else (engrossed in reading my amazing blog – fascinating!) 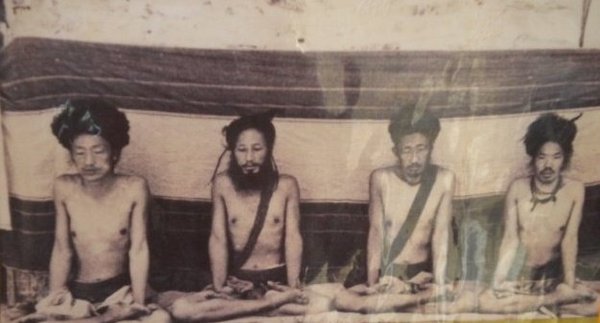 Attention acts as a filter. The central nervous system is receiving a mind-bogglingly huge amount of information from the periphery constantly, and has to decide which streams of information deserve priority in any given moment, effectively turning up the volume and resolution on those streams and inhibiting the signals from all of the other streams. The slight tingling sensation in your little toe (which you’d no doubt forgotten about again) generally rates as “low priority” whenever just about anything else is going on, and the same is true for the sensations coming from activities inside the body. In order to clearly feel inside the body the attention must be trained so that it is strong enough to amplify the more subtle signals coming from inside while filtering out or inhibiting signals from the other senses.

Another reason we don’t feel as much from inside the body is that those sensory pathways which deal with the interior of the body are less myelinated and thus their signals are much slower and less distinct. These pathways are evolutionarily much older, the more recent pathways from the skin, muscles and joints have a well-myelinated “fast track” through the spinal cord to the cortex and so we are much more inclined to notice information coming in from them – even the little toe.

For the few people who would like to learn about such things in depth, here is one of Dr Najeeb’s excellent medical science lectures on “ascending tracts in the central nervous system”. I’m always (foolishly?) hoping that one or two other serious students of Yoga or Daoist alchemy, “Kundalini” practices etc will realize that our nervous system is where all the action is, and will start putting in some time and effort and giving it the attention it deserves.

Ok so that’s all a bunch of reasons why we’re not particularly aware of this thing called “interoception” – it’s not really that useful for getting things done out there in the world (actually it can be extremely useful, and it turns out that it’s absolutely essential for certain extremely important things, but more on that later) – but what actually happens when we DO feel what’s going on inside our bodies, what is it that we feel? 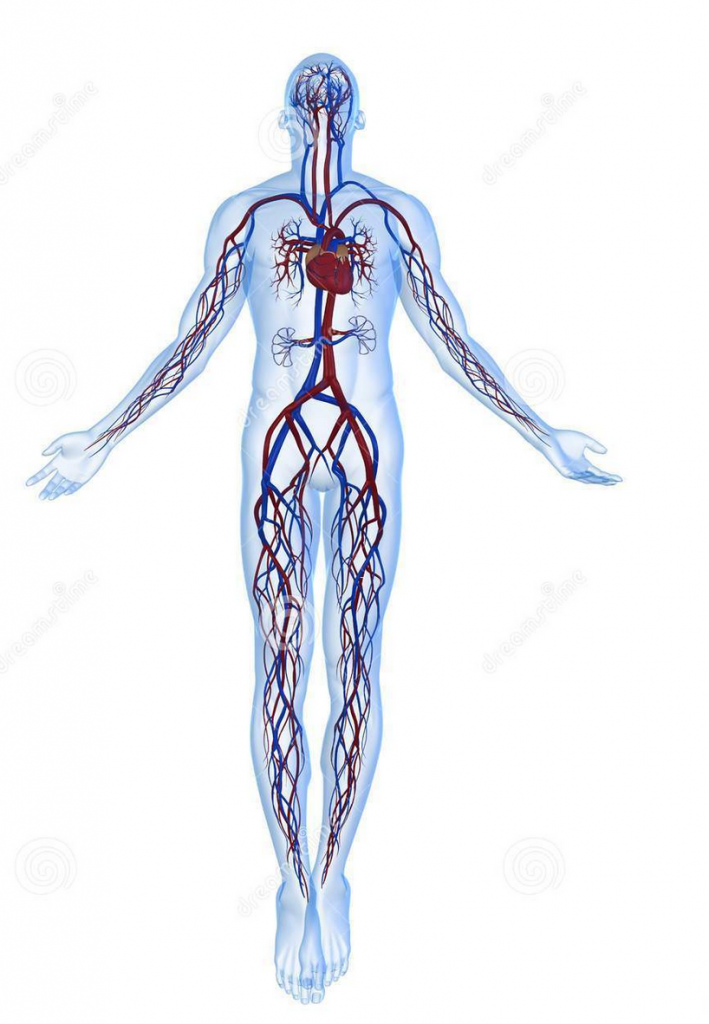 Blood flow. By far the biggest, strongest, most noticeable activity taking place inside the body is the beating of the heart. A huge ball of muscle, contracting strongly approximately once every second, pumping all of the blood in your body (about 5 litres) through your whole system every minute, causing every artery, vein and capillary in your entire body to pulsate rhythmically with every beat. Every second of every day.

Changes of pressure in the arteries. As blood surges through the system, the elastic walls of the arteries are stretched, so a wave of pressure moves from the heart towards the periphery, spiralling through the arch of the aorta, out through the neck into the head, through the armpits to the arms, through the stomach and down through the groin down to the legs and feet. The pulse, which can be felt by placing the fingers on any of several areas where the arteries pass close to the surface of the body, can be felt throughout the body simply by placing the attention wherever there is an artery and “tuning in” – using the power of selective attention to “focus” on the area and inhibit or “tune out” other competing signals.

With a bit of practice, it is possible to experience the entire body as a pulsating mass of of fluid-filled tubes, beating in time with the heart.

Well, these posts always seem to take longer, and contain more information, than I expect at first. I’ll leave this one here for now, and in my next post I’ll start on the actual method used in every tradition to develop the interoceptive sense: the breath!

In the meantime, for those who don’t mind a bit of serious science talk by serious scientists, this video by neuroanatomist Bud Craig is REALLY interesting: