Posted at 22:10h in Uncategorized by simon 3 Comments
0 Likes

– Our arms, legs, necks and lungs were bequeathed to us by a fish that lumbered onto land some 375 million years ago.

I just found out that one of my favourite books has been made into a new TV show. “Your Inner Fish: A Journey into the 3.5-Billion-Year History of the Human Body”, by Neil Shubin, is something like the book of my dreams, exploring the origins of various features of human anatomy as they are found in the fossil record and the genomes of different species.

This is exciting stuff for those of us interested in “ancestral” anything. I can’t wait to watch the show, and I’d recommend the book to pretty much anyone that can read. They’re basically describing the intellectual side of my ancestral movement work: study the anatomy of the human being, examine any one part, find the same part in other creatures living today, find it in the fossil record, trace the fossil record back to find the earliest appearance of that body part, getting a feel for all of the creatures in which this body part is found or has ever existed, their behaviours, environments, etc. We can take that a (crucial) step further by learning to feel and move that body part, differentiating it from the parts next to it, and differentiating each of its component parts from each other, and exploring what is revealed about this part’s contributions to our various whole-body movement patterns in different environments.

So the first step can be things like these:

Body part: the spine. Mission: differentiate each vertebral segment from the ones above and below, using simple movements. What it reveals: firstly, that most of the spine has been ignored and thus forgotten, but that as the spine is rediscovered and segments more clearly differentiated we begin to see undulations – wave-like movements inherent in the structure of the spine itself, which contribute to basic movement patterns like crawling, squatting, jumping and galloping. We feel for ourselves that all of the possible movements of our spines, we share with all of the creatures on our planet that have spines. We also discover a whole range of “postures” – essentially gestures performed with our torsos, rather than hands – associated with the different combinations of possible positions of the spinal segments, which often quite accurately communicate information about our emotional states (to others, but also to our own brains). This is a concept a lot of people may be familiar with. Amy Cuddy’s classic TED talk gets into this:

There’s another guy called John A. Appleton who does some very, very interesting (and powerful) work he calls “Posture Release Imagery“, a lot of which involves the different possible relationships between the dorsal and ventral surfaces of the body.

And there’s the Center for Nonverbal Studies: http://center-for-nonverbal-studies.org/crouch.htm

Again, this is ancient stuff. So ancient it boggles the mind. By working with it physically, unlocking the movements of each of the individual spinal segments, we become able to gesture with them. We also come to feel a particular truth: that we have a segmented body structure – or even better, that we are a segmented body structure, and that we share this particular pattern of morphology with just about every animal alive today. 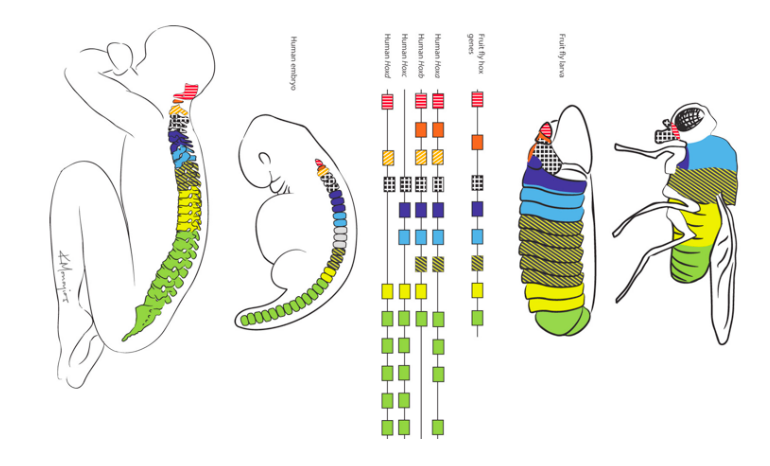 The image above is from “Your Inner Fish”, showing the Hox genes, responsible for the growth of the different body segments from head to tail, in humans, and in fruit flies.

A good chunk of the book is about the discovery of a fish called Tiktaalik, a “fish with a wrist”, a “fish, that could do a pushup”. This is the oldest fossil creature found with the bones of the forelimb arranged in the same way as the human arm: one long bone, two long bones, lots of bones. in the forelimbs of all the tetrapods – including humans, we have the humerus, radius and ulna, and then the carpal or wrist bones:

In Tiktaalik, we have this: The idea is that this particular structure (one bone, two bones, lots of bones) is effective at supporting weight, something that fins had never had to do previously, but which allowed this fish to start doing things in shallow water which others couldn’t.

So, some 375 million year old fish could do a pushup, and had wrists built like ours, and oh that’s right – we’re descended from those fish.

I hope we’ve established that the central tube from mouth to anus, the segmented structure of the vertebral column, and their basic movement patterns of peristalsis, undulation, and orienting behind the mouth, are all things we have inherited from our fishy and wormy great-great-great-great-great grandparents.

Could any of the movement patterns of ancient Tiktaalik still be present in our bodies today?

It’s something that we’ve all spent a lot of time doing, whether we remember it or not. It’s something we all had to do to get to where we are today. Some of us still enjoy crawling on our bellies, so we do it all the time, as do plenty of people who practice Yoga asanas or Pilates, or even people who like to lie on their tummy in the sun reading a book. The Center for Nonverbal Studies (one of my favourite websites) call this posture the “highstand display” when it’s used in a social context. 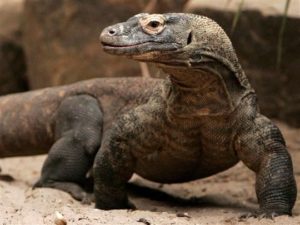 – “Sea origin. It is likely that paleocircuits for “standing tall” developed in sea creatures before animals set foot on land. Fossil evidence is lacking, but in living fishes, such as gobies, status and rank vary in proportion to physical body size. The very big dominate the merely large, who in turn dominate the small. Gobies and other piscines, however, may appear “bigger” through an array of nonverbal illusions. To loom larger, a goby stiffens and raises its fins, lifts its head, puffs out its throat, and flares its gill covers…In land animals, forelimb extension lifts the body’s front end to more vertically imposing heights. Doing a pushup makes living iguanas and lizards, e.g., look “bigger” than they appear with their bellies lowered to the ground... Mammals push up in aggressive stiff-walk postures. Bulls, e.g., take several stiff-steps to loom “large” before galloping ahead at full charge. Bears, coyotes, and wolves strut with a stiff-legged gait to carry their bodies higher off the ground…Primates show dominance by straightening their legs and widening their arms...An aggressive chimpanzee rises to a bipedal stance, widens its bristling arms, and swaggers from side to side.”[from http://center-for-nonverbal-studies.org/highstan.htm] Hopefully I’ll be able to find and watch episode one of “Your Inner Fish” this week. They’ve already released the preview for episode two, showing next Wednesday, which will be on “Your Inner Reptile”. In the meantime, I’m going to remember Tiktaalik every time I do a pushup.